Having no househelp for the past month now, we usually eat out for dinner since we're already exhausted from work to cook when we get home. Last Friday, we decided to eat at Saucemate Resto Bar, which is near the workplace of my wife in Newport. We wouldn't have known about the restaurant hadn't my wife's officemate, who lives near the place, told her about it. With our daughter, we got there at around 8 pm.

This year, we decided to celebrate Mother's Day at Cerealicious Cafe in SM Megamall . Having earlier bought a P300 voucher from Beeconomic which can purchase food and drinks worth P600, we decided to use it for this occassion.

We thought that going to the mall would be a breeze considering that it was a Manny Paquiao fight day and just like before, most of the roads are free of traffic because almost all are glued to their televisions to watch Pacman fight Mosley.

Little did we know that all of the people would be going to SM Megamall probably to watch the fight in one of the cinemas. All the parking spaces were full and we were lucky enough to find a space in front of the supermarket where the security guard allowed us to park. Convenient and free parking, wow! 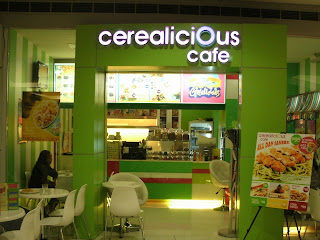