St. Jude Thaddeus, the Patron Saint of the Hopeless 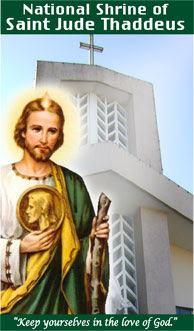 The National Shrine of St. Jude Thaddeus is just beside the office where I work right now but I only get to visit the place on Thursday not to pray the novena but to buy food which are sold beside it especially on novena days. I would often see a lot of students and other devotees who are probably going to take their board examination and go there on Thursdays to ask the intercession of St. Jude for help.

St. Jude Thaddeus was one of the 12 apostles and was named as such to distinguish him from Judas Iscariot, the betrayer of Jesus. "Thaddeus" is a Greek name, which means "great hearted one." Today, St. Jude is considered as the Patron Saint of the Hopeless or Impossible.

I never thought that one day, I will need his intercession after I was diagnosed with a kidney disease earlier this year. I now pray the novena in the office because I am too weak to bear the heat and mix with the throng of devotees who go there on Thursdays. My daughter, Angel, comes with me on Thursdays this summer vacation and meets her aunt and cousin and together they go for the novena.

I've researched a novena prayer to St. Jude Thaddeus on the internet and want to share it to Catholic believers.

A Graduation Celebration at the Legend Seafood Restaurant

We were invited to a dinner last Friday to celebrated my niece's graduation from college with a degree in Information Technology. I was told that the venue was the Legend.

All along, I thought that we will be having dinner at Legend Villas in Mandaluyong. I was a bit apprehensive to come since it is a Friday night as well a we'll have to pass along EDSA during rush hour. It was all cleared that it would be held in Legend Seafood Restaurant, which is just across World Trade Center and besides Wensha Spa along Gil Puyat Ave. Ext. in Pasay 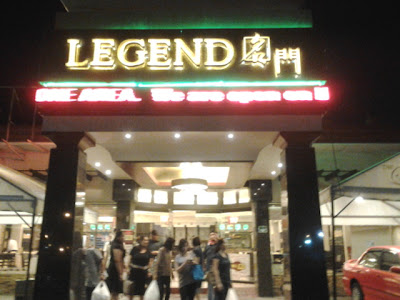 My wife and I were picked up by my sister and other nieces and nephews at the Marriott Hotel where my wife worked and I parked my car. They arrived at a little past 7 and due to the traffic, we reached the restaurant at past 8. We thought that we were already late but apparently, my niece's graduation was delayed to late in the afternoon as the heat was unbearable that the school decided to move the time.

When we got to the restaurant, we asked for the tables reserved by my brother. We were led to a private room with 2 round tables, each good for 12 persons.